Wilfrid James Plowden-Wardlaw was my Grandfather.
I recall many pleasent occasions when meeting my Grandfather, remembering the smell of his cigars and his very round and stately figure. He drove me to the Oratory Prep School in his Rolls Royce Silver Cloud when I was ten. I last saw him sadly at his wedding in Vancouver when he married on 24.04.1987. 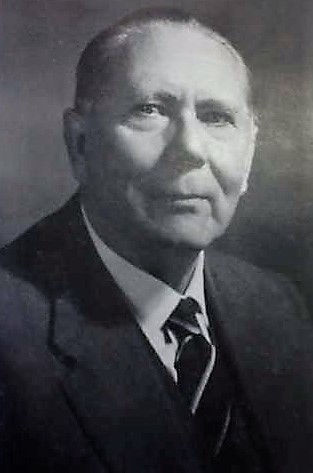 Born at 1459 Park Road, Boscombe, near Bournmouth, Hants., Feb 7th, 1905 : He was first married to Edith Alys Heathcote Catling on Dec.5th 1928, in London. His second marriage was to Maria H. Jauscheg (26.01.1913 - 26.09.2000) in the Immaculate Conception Parish on 24. April.1987. Raised as a strict catholic, he waited until the death of my Grandmother before marrying Maria, although he had lived many years with Maria in Chilton Towers, and separated from Edith (Grummie). My Grandmother died on September 11. 1986 .
Wilfred went first to boarding school, St. Peter´s Court, Broadstairs in 1913, after failing his CE exam for Eton he went to Lancing College between 1918 - 1922. Between 1923 - 1924, after moving from Lancing to Gorlands, an educational institution he took, and passed the exams for Magdalene College, Cambridge to study as a doctor, however left Cambridge in 1924 with no wish to be a doctor. During this time, roughly at the age of 18 - 19, Wilfred had started studying Ornithology at the British History Museum.
He had found his passion now in Ornithology, travelled over five continents, as is to be read in his autobiography collecting birds. He travelled to Canada, India, and then returned to Dalchosnie in Scotland, only to move again to British Guyana, Trinidad and Tobago, and ending up living in Vancouver.B.C. Canada.
He has many exhibits, even today in the British Natural History Museum.
His Children:
JOHN CAMPBELL PLOWDEN-WARDLAW  M.A. : born in Southbourne, Hants., Dec31, 1931 .
HILARY JAMES PLOWDEN-WARDLAW. Born March 6, 1934, in New Zealand.
WILFRIEDA ANN PLOWDEN-WARDLAW. M.R.C.S., L.R.C.P., F.R.C.P., Born June 5, 1930, at Valparaiso, Chilli.
SARA HELEN CHICHELE . Born February 14th 1937, at Wellington, New Zealand.
PHILIPPA EDITH MARY. Born September 30th 1942 at Penticot,B.C Canada.