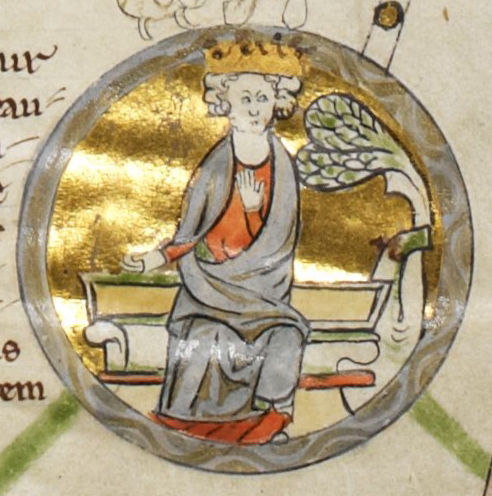 Edmund I or Eadmund I (920/921 – 26 May 946) was King of the English from 27 October 939 until his death. He was the elder son of Edward the Elder and his third wife Eadgifu, and a grandson of Alfred the Great. When Edward died in 924 he was succeeded by his eldest son, Edmund's half-brother Æthelstan, who died childless in 939. Edmund then became king. He had two sons, Eadwig and Edgar, by his first wife Ælfgifu, and none by his second wife Æthelflæd. His sons were young children when he was killed in a brawl with an outlaw at Pucklechurch in Gloucestershire, and he was succeeded by his younger brother Eadred, who died in 955 and was followed by Edmund's sons in succession.
Edmund's father, Edward the Elder, had three wives, eight or nine daughters, several of whom married Continental royalty, and five sons. Æthelstan was the only known son of Edward's first wife, Ecgwynn. His second wife, Ælfflæd, had two sons, Ælfweard, who may have been acknowledged in Wessex as king when his father died in 924 but who died less than a month later, and Edwin, who drowned in 933. In about 919 Edward married Eadgifu, the daughter of Sigehelm, ealdorman of Kent, who had died in 902 at the Battle of the Holme. Edmund had one or two full sisters. Eadburh was a nun at Winchester who was later venerated as a saint. The twelfth-century historian William of Malmesbury gives Edmund a second full sister who married Louis, prince of Aquitaine; she was called Eadgifu, the same name as her mother. William's account is accepted by the historians Ann Williams and Sean Miller, but Æthelstan's biographer, Sarah Foot argues that she did not exist, and that William confused her with Ælfgifu, a daughter of Ælfflæd.
Photo: Unknown authorUnknown author, Public domain, via Wikimedia Commons

Edmund was a young child when his half-brother Æthelstan became king in 924. He grew up at Æthelstan's court, probably with two important Continental exiles, his nephew Louis, future King of the West Franks, and Alain, future Duke of Brittany.[10] According to William of Malmesbury, Æthelstan showed great affection towards Edmund and Eadred: "mere infants at his father's death, he brought them up lovingly in childhood, and when they grew up gave them a share in his kingdom". Edmund may have been a member of the expedition to Scotland in 934 as, according to the Historia de Sancto Cuthberto (History of Saint Cuthbert), Æthelstan instructed that in the event of his death Edmund was to take his body to Cuthbert's shrine at Chester-le-Street. Edmund fought at the Battle of Brunanburh in 937, and in a poem commemorating the victory in the Anglo-Saxon Chronicle (ASC), Edmund ætheling (prince of the royal house) is given such a prominent role – and praised for his heroism alongside Æthelstan – that the historian Simon Walker has suggested that the poem was written during Edmund's reign. At a royal assembly shortly before Æthelstan's death in 939, Edmund and Eadred attested a grant to their full sister, Eadburh, both as regis frater (king's brother). Their attestations may have been because of the family connection, but they also may have been intended to display the throneworthiness of the king's half-brothers when it was known that he did not have long to live. This is the only charter of Æthelstan attested by Edmund the authenticity of which has not been questioned. Æthelstan died childless on 27 October 939 and Edmund's succession to the throne was undisputed. He was the first king to succeed to the throne of all England, and was probably crowned at Kingston-upon-Thames, perhaps on Advent Sunday, 1 December 939.
Brunanburh saved England from destruction as a united kingdom, and it helped to ensure that Edmund would succeed smoothly to the throne, but it did not preserve him from challenges to his rule once he became king.
Edmund probably married his first wife Ælfgifu around the time of his accession to the throne, as their second son was born in 943. Their sons Eadwig and Edgar both became kings of England. Ælfgifu's father is not known, but her mother is identified by a charter of Edgar which confirms a grant by his grandmother Wynflæd of land to Shaftesbury Abbey. Ælfgifu was also a benefactor of Shaftesbury Abbey; when she died in 944 she was buried there and venerated as a saint. Edmund had no known children by his second wife, Æthelflæd, who died after 991. Her father Ælfgar became ealdorman of Essex in 946. Edmund presented him with a sword lavishly decorated with gold and silver, which Ælfgar later presented to King Eadred. Æthelflæd's second husband was Æthelstan Rota, a south-east Mercian ealdorman, and her will survives.
On 26 May 946 Edmund was killed in a brawl at Pucklechurch in Gloucestershire. According to the post-Conquest chronicler, John of Worcester:
Like his son Edgar thirty years later, Edmund was buried at Glastonbury Abbey. The location may have reflected its spiritual prestige and royal endorsement of the monastic reform movement, but as his death was unexpected it is more likely that Dunstan was successful in claiming the body. His sons were still young children, so he was succeeded as king by his brother Eadred, who was in turn succeeded by Edmund's elder son Eadwig in 955.
From Wikipedia, the free encyclopedia