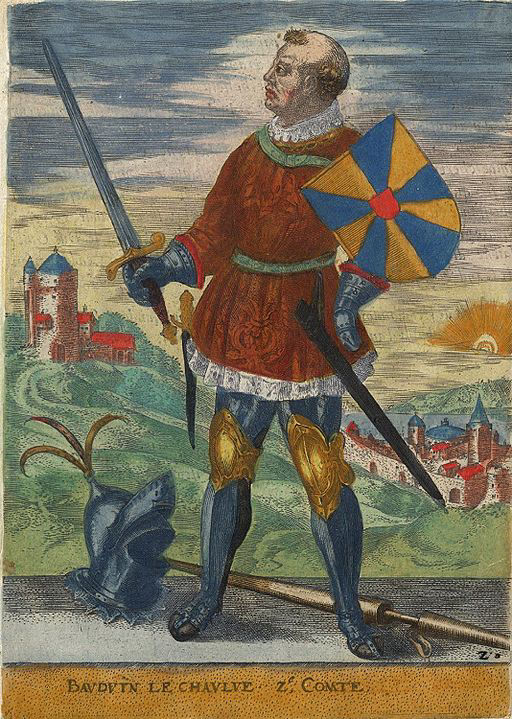 Baldwin II (c. 865–918), Called Baldwin "the Bald" (French: le Chauve), was a French nobleman and the second count of Flanders. He ruled from 879 until his death.
Born c. 865 he was the son of Baldwin I, Count of Flanders and Judith, a daughter of Charles the Bald. Through his mother he was a descendant of Charlemagne. Baldwin wanted to keep a good trading relationship with England. So in 884 Baldwin married Ælfthryth, a daughter of King Alfred the Great of England. They had the following children:
Arnulf I (c. 890–964), succeeded his father as count of Flanders.Adalulf (c. 890–933), Count of Boulogne. Ealswid. & Ermentrud. This high profile marriage raised the status of Baldwin II. His children had the distinction of belonging to two of the most important royal houses in western Europe. This and later marked the House of Flanders as one of the great princely houses of Europe.
When he first started ruling Flanders there were a number of very damaging Viking raids. They plundered everywhere except the area north of the Somme river. By 883 Baldwin was forced northward to the flat marshes of Flanders which became the territory most closely associated with the counts of Flanders from then on. Baldwin had built a series of wooden fortifications at Saint-Omer, Bruges, Ghent, and Courtrai. He also seized those lands and fortresses abandoned by royal and church officials. Baldwin had many of these same citadels used by his government, militia and local courts.

In 888 the west Frankish king Charles the Fat was deposed. There were several candidates to be king in his place. Because he was a grandson of Charles the Bald, Holy Roman Emperor and King of West Francia, Baldwin was eligible to be king. But he did not compete for the crown of western Francia. Instead Baldwin joined others in trying to convince the East Frankish king Arnulf to also take the west Frankish crown. But Arnulf was not interested. Odo, Count of Paris, was elected king But Odo did not want Baldwin to gaining control of the abbey of St. Bertin. This was a rich prize and caused Baldwin to not support Odo. The new king attacked Baldwin at Bruges but could not defeat him. Baldwin continued moving his borders to the south and gained control of Artois. He also got control of the important abbey of St. Vaast. When control of the abbey was given to Archbishop Fulk of Reims in 900, Baldwin had him killed. When his attempts to expand further into the upper Somme River valley were opposed by Herbert I, Count of Vermandois Baldwin also had him killed.
Baldwin II died 10 September 918 at Blandinberg (near Ghent) and was succeeded by his eldest son Arnulf I of Flanders. His younger son Adalulf was (the first) count of Boulogne. From Wikipedia, the free encyclopedia