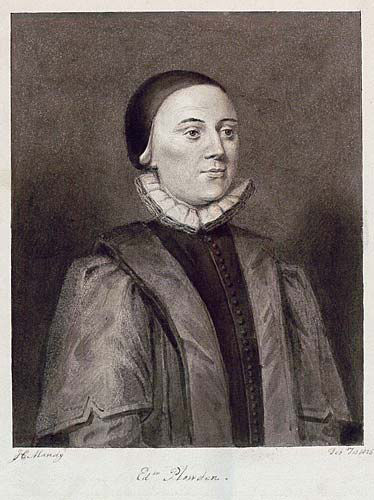 The surname Plowden was first found in Shropshire where the family were Lords of the Manor or Plowden Hall. Traditionally, the Plowdens of Plowden held these estates at the time of the Norman Conquest, but the first record is of Sir Roger Plowden who accompanied King Richard on his Crusade to the Holy Land and was present at the siege of Acre. For his gallantry he was awarded by the King an augmentation of two fleur-des-lys on his Coat of Arms, a distinction the family has borne ever since.
One of the most notable lords of the estate was Sir Edmund Plowden (1518-1585), a distinguished English lawyer, legal scholar and theorist during the late Tudor period.
Edmund was born at Plowden Hall, Lydbury North, Shropshire, the son of Humphrey Plowden (1490–1557) and his wife, Elizabeth Wollascot, neé Sturry (died 1559).
Educated at the University of Cambridge, he did not take a degree, and proceeded to the Middle Temple in 1538 to study law. Subsequent to studies at Oxford, he qualified as a surgeon and physician in 1552.
Upon the accession of the Catholic Queen Mary, Plowden was appointed one of the Council of the Marches (of Wales). In 1553, he was elected Member of Parliament for Wallingford (then in Berkshire now in Oxfordshire), followed, in the next two years, by the same office for both Reading, Berkshire and then Wootton Bassett, Wiltshire. He lived mostly at Shiplake Court in Oxfordshire and Wokefield Park in Berkshire. The unusual breadth of his religious views were shown early in his career when he, however, withdrew from the House, on 12 January 1555, because he disapproved of the proceedings there.
The senior representative of the elder branch (Plowden of Plowden) was (up to 1914) William Francis Plowden of Plowden (1853-1914), who married in 1874 Lady Mary Dundas, sister to the 1st Marquis of Zetland, Viceroy of Ireland (1889-1892). Mr. William Plowden was succeeded by his eldest son Francis Charles, who died from wounds received in the Great War, Aug. 22, 1918. He was succeeded by his brother Roger Edmund Joseph, born 1879, M.F.H., who married in 1918 Mary Cholmondeley (now dead). He has one son and three daughters. Plowden Hall, near Bishop's Castle in the parish of Lydbury North, in the county of Salop, is rich in pictures, including a reputed Vandyke and a portrait by Sir Peter Lely of Queen Mary of Modena, and a portrait of Dorothea Phillips and her sister by Angelica Kauffman. Plowden Hall still has the priests' hiding places (so useful in penal times) and the wig-stands outside the bedrooms. A relic of the reputed True Cross has been in the domestic chapel of the house since 1740. This relic was shown to Mr. Plowden-Wardlaw by Mr. Plowden in August, 1908.