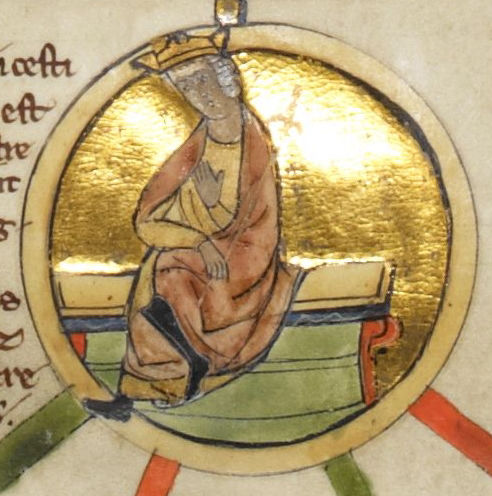 Ethelwulf, Old English for "Noble Wolf"; was King of Wessex from 839 to 858. In 825, his father, King Egbert, defeated King Beornwulf of Mercia, ending a long Mercian dominance over Anglo-Saxon England south of the Humber. Egbert sent Ethelwulf with an army to Kent, where he expelled the Mercian sub-king and was himself appointed sub-king. After 830, Egbert maintained good relations with Mercia, and this was continued by Ethelwulf when he became king in 839, the first son to succeed his father as West Saxon king since 641.

The Vikings were not a major threat to Wessex during Ethelwulf's reign. In 843, he was defeated in a battle against the Vikings at Carhampton in Somerset, but he achieved a major victory at the Battle of Aclea in 851. In 853 he joined a successful Mercian expedition to Wales to restore the traditional Mercian hegemony, and in the same year his daughter Ethelswith married King Burgred of Mercia. In 855 Ethelwulf went on pilgrimage to Rome. In preparation he gave a "decimation", donating a tenth of his personal property to his subjects; he appointed his eldest surviving son Ethelbald to act as King of Wessex in his absence, and his next son Ethelberht to rule Kent and the south-east. Ethelwulf spent a year in Rome, and on his way back he married Judith, the daughter of the West Frankish King Charles the Bald.

When Ethelwulf returned to England, Ethelbald refused to surrender the West Saxon throne, and Ethelwulf agreed to divide the kingdom, taking the east and leaving the west in Ethelbald's hands. On Ethelwulf's death in 858 he left Wessex to Ethelbald and Kent to Ethelberht, but Ethelbald's death only two years later led to the reunification of the kingdom. In the 20th century Ethelwulf's reputation among historians was poor: he was seen as excessively pious and impractical, and his pilgrimage was viewed as a desertion of his duties. Historians in the 21st century see him very differently, as a king who consolidated and extended the power of his dynasty, commanded respect on the continent, and dealt more effectively than most of his contemporaries with Viking attacks. He is regarded as one of the most successful West Saxon kings, who laid the foundations for the success of his son, Alfred the Great.
From Wikipedia, the free encyclopedia