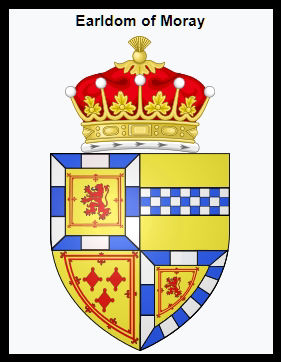 The title Earl of Moray, Mormaer of Moray or King of Moray was originally held by the rulers of the Province of Moray, which existed from the 10th century with varying degrees of independence from the Kingdom of Alba to the south. Until 1130 the status of Moray's rulers was ambiguous and they were described in some sources as "mormaers" (the Gaelic term for "Earl"), in others as "Kings of Moray", and in others as "Kings of Alba". The position was suppressed by David I of Scotland some time after his defeat of Óengus of Moray at the Battle of Stracathro in 1130, but was recreated as a feudal earldom by Robert the Bruce and granted to Thomas Randolph, 1st Earl of Moray in 1312.

The title has subsequently been created several times in the Peerage of Scotland. It has been held by Clan Stewart since the 16th century, when James Stewart, illegitimate son of James V, was granted the title.
See page for author, CC BY-SA 3.0  via Wikimedia Commons

History of the Earldom of Moray
For the history of the province or kingdom of Moray, see Province of Moray on Wikipedia.
The province of Moray's importance as part of the kingdom of Scotland was demonstrated during the years of major warfare between 1296 and 1340. The province was relatively untouched by direct fighting and Royal-led English armies penetrated Moray on only three occasions in 1296, 1303 and 1335, and significant English occupation occurred only in 1296–97. This security meant that it was a vital refuge and recruitment ground for the Scottish guardians between 1297 and 1303, and provided Robert I of Scotland with a base and allies during his northern campaign against the Comyns and their allies in 1307–08. The province was forced to submit to Edward I of England in 1303 and Robert I of Scotland therefore clearly recognized the significance of Moray for the security of his realm. In 1312 Robert I re-established the Earldom of Moray for his nephew, Thomas Randolph, 1st Earl of Moray. The new earldom included all of the old province and the crown lands of the Laich or coastal area of Moray.

Thomas's son John Randolph was killed in 1346, leaving no heir and the other noble families including the Comyns, Strathbogies and Morays had all disappeared from or left the province by between 1300 and 1350. With the absence of noble leaders, power fell to lesser figures who functioned in kin-based groups such as the Clan Donnachaidh of Atholl and the Chattan Confederation which centred on Badenoch. This drew in lords and men from outside of the province, from further south such as the Dunbars and Stewarts who staked their claims. In 1372, the Earldom of Moray was divided between them with John Dunbar receiving the coastal districts and Alexander Stewart, favourite son of Robert II of Scotland being made lord of Badenoch in the uplands.

The division of Moray led to local conflict which was exacerbated by the activities of local kindreds and the eastward spread of the Gaelic superpower, the Lord of the Isles. The activities of the islesmen and kindreds in the service of Alexander Stewart made Moray the area of greatest conflict between the revived power of Gaelic Scotland and the structured society under the crown established during the previous centuries. Churchmen and burgesses made repeated complaints about the attacks of raiding caterans, the most notable being the burning of Elgin Cathedral by Alexander Stewart, Earl of Buchan, also known as the Wolf of Badenoch, in a dispute with the Bishop of Moray.

Scotland's rulers were slow to react to the problems in the earldom of Moray. Their response was largely indirect and the governor, Robert Stewart, Duke of Albany, campaigned in the region in 1405 and 1411. James I of Scotland did the same in 1428 and 1429. They preferred to rely on a Lieutenant, Alexander Stewart, Earl of Mar, the son of the Wolf of Badenoch. When the Earl of Mar died in 1435, a power vacuum allowed the Lords of the Isles to dominate Moray from the 1430s to the 1450s. The crown's earldom was restricted to the coastal areas of Moray and was held by lords whose resources lay elsewhere. The last of these once-loyal lords were the Clan Douglas, Earls of Douglas who were forfeited in 1455, after the Battle of Arkinholm against the king and a new power emerged in the province. The Clan Gordon, Earls of Huntly secured Badenoch in 1452 and occupied Moray three years later. The crown refused to allow the Gordons the provincial dominance of the Randolphs, but they remained chief lords of the area from the 15th century onwards, but under the possession of the crown royal line.

The earldom eventually descended to Elizabeth Stewart, 7th Countess of Moray, whose husband was also recognised as earl. However, when her husband, James, was killed in battle against the Sovereign in 1455, his title was attainted.

The next grant was made to James Stewart, the son of King James IV. He, however, died without children, and the title became extinct. The title was next given to George Gordon, 4th Earl of Huntly. Gordon fell out of royal favour, and in 1462, he was killed and his title forfeited.

The most recent creation was in favour of another James Stewart, the illegitimate son of King James V. Other Scottish titles associated with this creation are: Lord Abernethy and Strathearn (created 1562), Lord Doune (1581) and Lord St Colme (1611). Furthermore, Lord Moray holds the title Baron Stuart (1796), of Castle Stuart in the County of Inverness; since it is in the Peerage of Great Britain, it entitled the Earls of Moray to sit in the House of Lords until the passage of the Peerage Act 1963.

Perhaps the most well-known Earl of Moray was James Stewart, 2nd Earl of Moray, the husband of Elizabeth Stewart, 2nd Countess of Moray, who held the earldom jure uxoris (by right of his wife), as he was the subject of a famous ballad, "The Bonny Earl O'Moray". He was also a direct male-line descendant of King Robert II.

The family seats are Doune Lodge, near Doune, Stirling and Darnaway Castle, near Forres, Moray.

From Wikipedia, the free encyclopedia