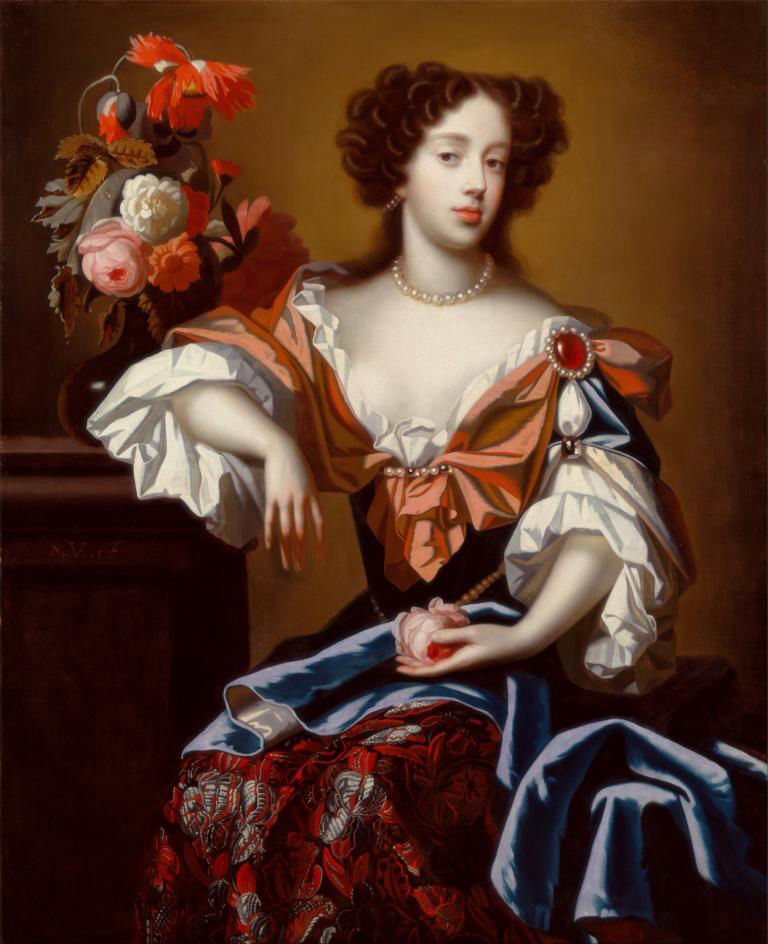 In Miss Strickland's life of Queen Mary Beatrice a pleasing incident is related about the little daughter of Mrs Plowden, one of the Queen's Ladies in Waiting. This Mrs. Plowden was the wife of Francis Plowden (2nd son of Plowden of Plowden), Comptroller of the Household to King James Il. He was great-nephew of Sir Edmund Plowden, 1st Earl Palatine of New Albion, from whom the Chichele Plowdens and the Plowden-Wardlaws are descended. Mrs. Plowden was the daughter of the Honourable John Howard the 2nd son of the Catholic martyr in Titus Oates' plot, William Howard Viscount Stafford (executed 1680), and sister and heiress of the 4th and last Earl of Stafford. Mr. and Mrs. Plowden's daughter Mary married Sir George Jerningham, Bt., in 1733, and brought the Stafford title (the Barony only) to his family. The brother of Mary Plowden (Lady Jerningham) was the Abbé Plowden. If he had been able to marry and had had descendants the Barony of Stafford would have been a Plowden title. Being a Roman priest he was not likely to move for the reversal of the attainder ; but his two sisters (of whom the eldest was Lady Jerningham) became on his death in 1788 co-heiresses to the Barony of Stafford, which was revived on the reversal of the Stafford attainder in 1824 in the person of a later holder of the Jerningham baronetcy in virtue of his descent from Mary Plowden (Lady Jerningham).
Simon Pietersz Verelst / Public domain Photo

In describing the King's apartments at St. Germain Miss Strickland says :— "In one of the lobbies there is a small square window which commands a view of the royal closet, so that anyone ambushed there might look down upon His Majesty and watch all his proceedings. A pleasing tradition connected with this window was related to me by a noble lady (Lady Bedingfeld), whose great-grandmother, Mrs. Plowden, was one of the ladies in the household of Queen Mary Beatrice. Mrs. Plowden's infant family lived with her in the Palace of St. Germain, and she sometimes found it necessary, by way of punishment, to shut up her little daughter Mary, a pretty, spoiled child of four years old, in the lobby leading from her own apartment to the Queen's back stairs; but the young lady always obtained her release by climbing to the little window that looked down into the King's closet and tapping at the glass until she had attracted his attention ; then, showing her weeping face, and clasping her hands in an attitude of earnest entreaty, she would cry in a sorrowful tone : 'Ah, Sire, send for me.' James, unless deeply engaged in business of importance, always complied with the request of the tearful petitioner, for he was very fond of children, and when Mrs. Plowden next entered the royal presence with the Queen, she was sure to find her small captive closeted with His Majesty, sitting at his feet, and sometimes on his knee. At last she said to the King :"I know not how it happens, but whenever my little girl is naughty, and I shut her up in the lobby, your Majesty does her the honour of sending for her into your closet.' James laughed heartily, and pointing to the window above,explained the mystery.