James Tait was my Great Grandfather, a barrister and a priest of the Church of England.
The Photo below was taken at 5, Madingley Road, Cambridge in 1932.
Seated: L-R Alys (Grandmother) with my father John, Margaret (Great Aunt) with Bingo, Eleanor (Wife of Thomas Campbell) with my Aunt Ann.  Standing: L-R Wilfrid (Grandfather) Edith Hay Campbell (Great Grandmother),Thomas Campbell and James Tait Plowden-Wardlaw. (Great Grandfather)

My Great-Grandfather.Born  James Tait Wardlaw was born in London on St. Clements day November, 23rd 1873. the son of James Campbell Wardlaw of Shanklin, Isle of Wight, and his second wife Augusta Ellen Chichele-Plowden. He was baptized on 28 Jan 1874, Saint Andrew,St Marylebone,London,England

He was educated at Malvern College and King's College, Cambridge, where he gained the degree Master of Arts in March 1900.

He married in Pretoria on April 19, 1904-Edith Hay Campbell, 2nd daughter of Richard Frederik Fotheringham Campbell of Craigie (4th Laird) D.L. and M.P. for the Ayr Burghs (1885-1888), who died May, 1888, and Arabella Jane daughter of Archibald Argyll Hay, and widow of Charles Tennent. Mrs.Campbell died Dec., 1888.

He was an author of devotional works (Vox Domini and Vox Dilecti), under the name of Clement Humilis. After the death of his uncles David Wardlaw, W.S. (born 1831 : died 1908), and Thomas Brodie Wardlaw, late Lieutenant in the Staffordshire Regiment (38th Foot) (born 1834: married in 1874 to Emma Holmes, sister to the late Major-General Holmes : died without issue Aug. 21, 1916), Mr. Plowden-Wardlaw became the senior representative of the Wardlaws of Gogarmount Midlothian. This seniority is merely titular, as Gogarmount was sold in the 40's of the 19th century, the consequence of early railway speculation, and the family went to reside in France. 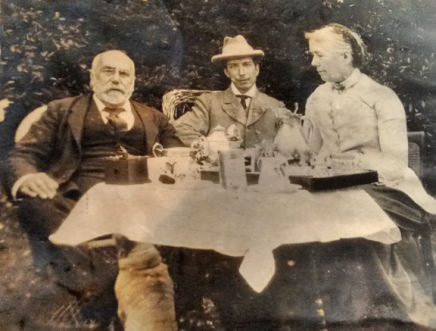 Among his publications (some issued under the pseudonym Clement Humilis) are:

The Test of War
Religious Reconstruction after the War: a Cambridge programme (1916)
Catholic reunion: an Anglican plea for a uniate Patriarchate of Canterbury and for an Anglican ultramontanism
Service Book (St George's Beckenham). Published by the Society of SS Peter and Paul (1923)[5]
Vox Dilecti..Messages from the Master. (1931)
Vox Domini...The Ancient Faith in Modern Terms
Daily Messages from the Master (1933)
Supplement to the Missal: The Proper of Masses in Commemoration of Thirty-nine Beati of the Anglican Communion Published by W. Knott & Son Ltd, Holborn, London (1933)
Wikipedia: James Plowden-Wardlaw