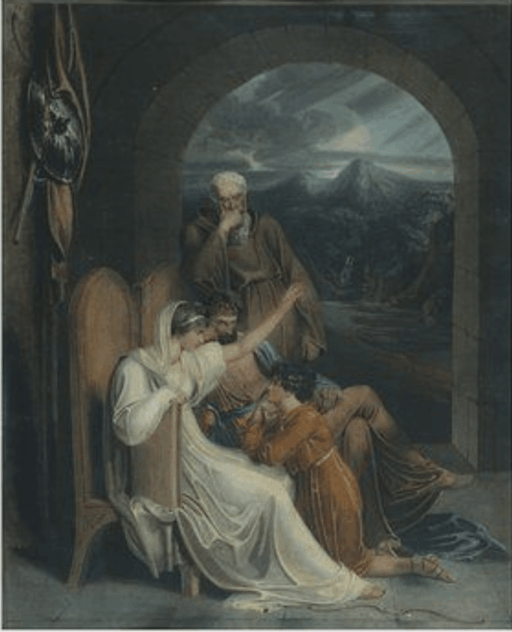 Judith of Flanders (c. 843 – c. 870) was a Carolingian princess who, by her three successive marriages, became Queen of Wessex and Countess of Flanders. The eldest daughter of Emperor Charles the Bald,King of West Francia, and his first wife Ermentrude of Orléans. Named after her paternal grandmother, Judith of Bavaria, her exact date of birth is uncertain, but her parents were married on 13 December 842, and Judith was their eldest child, born a little over a year later, probably in early 844. She married the elderly King Æthelwulf of Wessex as an adolescent and was crowned queen in contravention of the custom in Wessex. After Æthelwulf's death in 858, Judith married his son and successor, Æthelbald. Her marriage with her stepson, considered scandalous by her contemporaries, ended with his death in 860. Queen Judith then returned to her father, only to elope in 861 or 862 with the Flemish forester Baldwin. Having thus provoked her father's wrath, Judith and Baldwin went into exile. They were reconciled with Charles in late 862, after which Baldwin was granted the march of Flanders.
In 855, King Æthelwulf of Wessex made a pilgrimage to Rome with his youngest son Alfred, who was about six years old. On the way back, in 856, he stayed at the court of Charles the Bald. Back in July, on the way to Rome, Æthelwulf negotiated his marriage with Judith, who was twelve years old, while he was probably in his mid-fifties. It was a diplomatic alliance: both kings suffered from Viking attacks, and for Æthelwulf, this union had the additional advantage of an alliance with the prestigious Carolingian dynasty.
Westall, Richard R.A., (1765 - 1836), Public domain, via Wikimedia Commons

Judith was a "cultivated lady" like most Frankish princesses of the time, and her queenship probably brought the "aura of the Carolingian monarchy" to the court of Wessex.
After the marriage, Æthelwulf with Judith and Alfred return to Wessex. But back in his kingdom, Æthelwulf faced difficulties. His eldest surviving son, Æthelbald, supported by Eahlstan, Bishop of Sherborne and Eanwulf, Ealdorman of Somerset, conspired to dethroned him. The marriage with Judith may have played a role in this conspiracy: Æthelbald probably feared that his father's new young wife, the great-granddaughter of Charlemagne, will give birth to a higher-born heir than himself. In addition, some of the nobles were outraged that Judith was crowned and called queen, which was contrary to local custom. Judith had no children from Æthelwulf, who died on 13 January 858. Shortly after the death of Æthelwulf, the new king, Æthelbald, married his stepmother. Judith remained still childless when Æthelbald died on 20 December 860, after a reign of two-and-a-half years.
Presumably Charles the Bald was going to arrange another marriage for his daughter. Some historians have argued that neither Judith's first nor second marriage was consummated. There are also claims, more similar to legend, that the future count of Flanders, Baldwin (who according to tradition, would be the son of forester called Odoacre became interested in Judith even before her first marriage. But, most likely, Baldwin met Judith in 861, when he visited the monastery of Senlis; the Encyclopedia Britannica claims that Baldwin fell in love with the Wessex dowager queen during this visit. Around Christmas 861 (or early 862) Judith either fled with Baldwin, or was kidnapped by him. According to the Annales Bertiniani, Judith was not abducted at all: there she is depicted not as the passive victim of bride theft but as an active agent, eloping at the instigation of Baldwin and apparently with her brother Louis the Stammerer's consent:
Charles the Bald eventually allowed Judith and Baldwin to marry. They returned to France and were officially married at Auxerre on 13 December 862.
From her marriage with Baldwin I of Flanders, Judith bore at least three sons: Charles (c. 864/865 – died young), Baldwin (c. 865/867 – c. 10 September 918). He is named as second of the three sons of Baldwin and Judith in the list of counts of Flanders recorded in the Cartulaire de Saint-Bertin. He succeeded his father in 879 as Baldwin II, Count of Flanders; married between 893 and 899 with Ælfthryth of Wessex, daughter of Alfred the Great, and continues our line.  Ralph (c. 867/870 – murdered 17 June 896).
The exact date of Judith's death is unknown. It is believed that this happened no earlier than 870.
From Wikipedia, the free encyclopedia