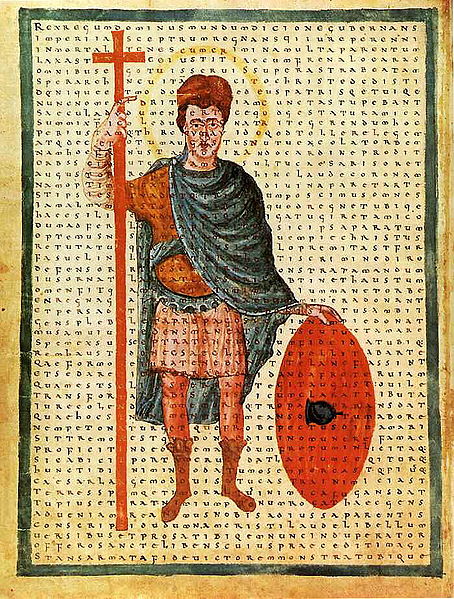 Louis the Pious (778 – 20 June 840), also called the Fair, and the Debonaire, was the King of the Franks and co-emperor with his father, Charlemagne, from 813. He was also King of Aquitaine from 781. As the only surviving adult son of Charlemagne and Hildegard, he became the sole ruler of the Franks after his father's death in 814, a position which he held until his death, save for the period 833–34, during which he was deposed.

During his reign in Aquitaine, Louis was charged with the defence of the empire's southwestern frontier. He conquered Barcelona from the Muslims in 801 and asserted Frankish authority over Pamplona and the Basques south of the Pyrenees in 812. As emperor he included his adult sons, Lothair, Pepin, and Louis, in the government and sought to establish a suitable division of the realm among them. The first decade of his reign was characterised by several tragedies and embarrassments, notably the brutal treatment of his nephew Bernard of Italy, for which Louis atoned in a public act of self-debasement.

In the 830s his empire was torn by civil war between his sons, only exacerbated by Louis's attempts to include his son Charles by his second wife in the succession plans. Though his reign ended on a high note, with order largely restored to his empire, it was followed by three years of civil war. Louis is generally compared unfavourably to his father, though the problems he faced were of a distinctly different sort.
Photo: Commons Copyright/ Licensing {{PD-art}}

Louis was born while his father Charlemagne was on campaign in Spain, at the Carolingian villa of Cassinogilum, according to Einhard and the anonymous chronicler called Astronomus; the place is usually identified with Chasseneuil, near Poitiers. He was the third son of Charlemagne by his wife Hildegard.
Louis was crowned King of Aquitaine as a three-year-old child in 781. In the following year he was sent to Aquitaine accompanied by regents and a court. Charlemagne constituted this sub-kingdom in order to secure the border of his realm after the destructive war against the Aquitanians and Basques under Waifer (capitulated c. 768) and later Hunald II, which culminated in the disastrous Battle of Roncesvalles (778). Charlemagne wanted his son Louis to grow up in the area where he was to reign. However, in 785, wary of the customs his son may have been taking in Aquitaine, Charlemagne, who after Hildegard's death in 783, had remarried Fastrada, sent for Louis in 785. Louis presented himself in Saxony at the royal Council of Paderborn dressed in Basque costumes along with other youths in the same garment, which may have made a good impression in Toulouse, since the Basques of Vasconia were a mainstay of the Aquitanian army.
Between 816 and 837, Louis was involved in numerous civil wars and campaigns, the last being the 3rd civil war.
Louis fell ill soon after his final victorious campaigns and retreated to his summer hunting lodge on an island in the Rhine near his palace at Ingelheim. He died on 20 June 840 in the presence of many bishops and clerics and in the arms of his half-brother Drogo as he pardoned his son Louis, proclaimed Lothair emperor and commended the absent Charles and Judith to his protection.
Soon dispute plunged the surviving brothers into yet another civil war. It lasted until 843 with the signing of the Treaty of Verdun, in which the division of the empire into three souvereign entities was settled. West Francia and East Francia became the kernels of modern France and Germany respectively. Middle Francia, that included Burgundy, the Low Countries and northern Italy among other regions was only short-lived until 855 and later reorganized as Lotharingia. The dispute over the kingship of Aquitaine was not fully settled until 860.
From Wikipedia, the free encyclopedia