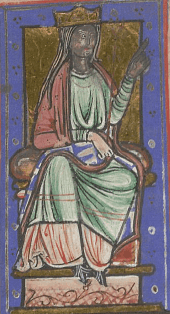 Ealhswith or Ealswitha (died 5 December 902) was the wife of King Alfred the Great, and the sister of Æthelwulf, She was married to Alfred in 868 at Gainsborough, Lincolnshire.
Her father was a Mercian nobleman, Æthelred Mucel, Ealdorman of the Gaini, which is thought to be an old Mercian tribal group. Her mother was Eadburh, a member of the Mercian royal family, and according to the historian Richard Abels she was a descendant of King Cenwulf of Mercia.
She was commemorated as a saint in the Christian East and the West on 20 July.
Ealhswith is very obscure in contemporary sources. She did not witness any known charters, and Asser did not even mention her name in his life of King Alfred. In accordance with ninth century West Saxon custom, she was not given the title of queen. According to King Alfred, this was because of the infamous conduct of a former queen of Wessex called Eadburh, who had inadvertently poisoned her husband when trying to poison another
Alfred left his wife three important symbolic estates in his will, Edington in Wiltshire, the site of one important victory over the Vikings, Lambourn in Berkshire, which was near another, and Wantage, his birthplace. These were all part of his bookland, and they stayed in royal possession after her death.
There is little known about Ealhswith except after Alfred's death in 899 she founded the convent of St Mary's Abbey, Winchester, known as the Nunnaminster.
Alfred and Ealhswith had five children who survived to adulthood.
Æthelflæd (d. 918), Lady of the Mercians, married Æthelred, Lord of the Mercians
Edward the Elder (d. 924), King of the Anglo-Saxons
Æthelgifu, made abbess of her foundation at Shaftesbury by her father
Ælfthryth, Countess of Flanders (d. 929), married Baldwin II, Count of Flanders
Æthelweard (d. c. 920).        From Wikipedia, the free encyclopedia
AnonymousUnknown author, Public domain, via Wikimedia Commons